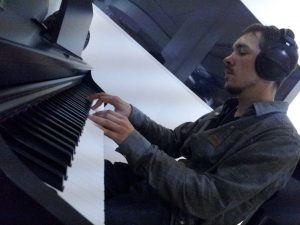 Musicproducer and -composer Michael Warras a.k.a. CeeQu Beats was born in the year 1990 in a town near Munich, Germany and started with music at the young age of 6 by learning to play the keyboard. When he was 12 years old he wrote his first Raplyrics (in german language) and with 13 years he started to do freestylerap. At the age of 15 he composed his first own melody and produced the first beat. He completed his beatdesign class at the “Deutsche Pop Music Academy” already in 2008 as a certified Beatdesigner. One year later he broke off with rap for 6 years and concentrated on musicproduction and -composition only. „There is always the big chance to make it, anywhere and everywhere but the dream seems to never come true in the end, especially if you aren’t able to invest into your career.“

He basically works on HipHop, Rap, Trap and R’n’B Beats but also Popmusic. He also likes to include influences from modern Dubstep, Dance or Electroproductions up to Blues and Jazz influences. Sometimes he does Classical or Crossover productions which are not project based to grow the knowledge of music compostion or just live out a special emotion through his music. He is connected to artists and songwriters worldwide.

„If you are an artist, you are able to express any emotion. The better you become the more detailed you can express whatever you feel.“